The Book Club recently finished reading the book True Grit by Charles Portis. A Western that was made into a movie starring John Wayne, True Grit is a genuine American classic.

The Cohen brothers have recently adapted the book into a new movie. Instead of remaking the John Wayne classic, they decided to stick as close to the book as possible. You can check out the trailer below. We’ll be checking out the movie next Thursday and feel free to join us even if you haven’t read the book.

Date: Thursday, January 13
When: 7:50pm
Where: Alamo Drafthouse (S. Lamar)
Email John Bagwell if you have any questions. 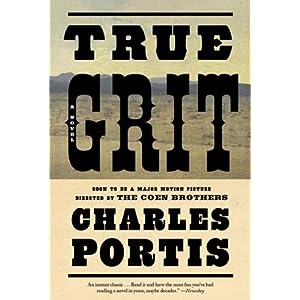 Charles Portis has long been acclaimed as one of America’s foremost comic writers. True Grit is his most famous novel–first published in 1968, and the basis for the movie of the same name starring John Wayne. It tells the story of Mattie Ross, who is just fourteen years of age when a coward going by the name of Tom Chaney shoots her father down in Fort Smith, Arkansas, and robs him of his life, his horse, and $150 in cash money. Mattie leaves home to avenge her father’s blood. With the one-eyed Rooster Cogburn, the meanest available U.S. Marshal, by her side, Mattie pursues the homicide into Indian Territory.

Finding ways for our lives to intersect.  We can do more together than we can do alone.