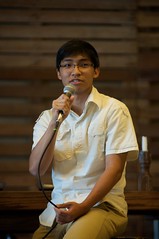 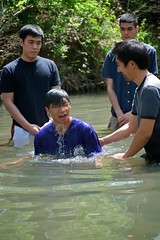 I was born in Port Lavaca TX, and ever since I could remember, I was taken to church by a family friend. Each Sunday I would wake up, dress up, and then rush out to catch a ride to church. However, at that time church was just like going to school for me, a routine that I didn’t question. As a kid I did not know what I was doing; I was just going to church each Sunday, following what my brother was doing. At church I was always the kid that dozed off during service and even in Sunday school. My brother would always wake me up with an angry face, but I didn’t understand why he was so upset, I was just tired. Obviously as a child I did not realize what a life of following Christ meant, and the reason behind going to church.

Well as time went on, things between the family friend and my family become quite tense, and the relationship between our families grew sour. Most of the tension stemmed from work-related issues, and somehow the family friend was involved with filing complaints about my Dad, which almost resulted in my Dad losing his job. After this my bother and I stopped going to church. It was about middle school and I still didn’t realize who exactly Christ was; not going to church anymore on Sundays just meant to me that I could sleep in more. However, as my brother grew in his faith, and questioned my parents about going back to church, I became more curious; I couldn’t understand why he wanted to go to church so badly. Now is probably when I should mention that my parents are Buddhist and the talks about going back to church did not go well. There was always plenty of yelling, frustration, and tears on my brother’s face and as well as mine; mine were more because I didn’t like seeing everyone so angry. This is when I really realized why every Sunday my brother and I would go to church with a family friend instead of going with my parents.

However, why would my parents let us go to church as a children, but later on forbid us to go still confuses me today. Either way, as my brother began to further his faith in his high school years I saw a change in him. I too started to question more about what it meant to follow Christ, and exactly what did this amazing story about God giving up His one and only son for us meant. During my Sophomore year of high school, as I was surrounded by more Christian influences, I had this desire to learn more about Him. I remember there would be nights when my good friend of mine, Josh, and I would go out and just talk about things, and questions about Christianity would always come up. At the same time, I was also thinking about the future, graduation, and just what life held for me up ahead. I remember wondering what the purpose of life was. Through these midnight walks, and conversations with other friends, I began to realize that there was a purpose in life, a bigger purpose in why I was created, and this was all through Christ. From then on, I began to, I suppose, secretly follow Christ and learn more about how I should live my faith.

Then freshman year as I was at an AACM event one night and one of the speakers asked, “Would you like to commit yourself to Christ tonight?” That night for some reason as he was talking my legs could not keep still, and I had an urge to just stand up when he asked. So that was the day when I publicly announce that I wanted to devote my life to Christ; now others knew. From there, I wanted to ask my parents if I could get baptized, but i feared angering them and creating a wedge between us so I avoided bringing up the topic of baptism. By now our parents allowed us to go to church, but I don’t think they wanted us to become part of the church. However as time passed, I realized that I was just being a coward, and being the un-confrontational person I am, I didn’t want to bring up anything that would upset my parents or start a fight with them. So I decided I’d have to bring this topic up, because it was burning inside me to tell them. After gaining more courage and deciding that I wanted to get baptized and publicize my faith (even to my parents), I talked to my parents, and here I am today, getting baptized this first weekend of May.

As for what it means for me to live a life following Christ, It means living life with a purpose. To understand the reason I was created, and learning more about what God’s plans for me are. Also it means trying to live like Jesus Christ, and learning how to love everyone in my daily life. Then finally living life as a follower of Christ, means telling other people about His great story of sacrifice, love, and compassion. It’s like the movie Pay-It-Forward, as people have passed on this great story to me, I feel obliged to “pay-it-forward,” and with all that Christ has blessed me with, I should extend my gifts and share the Good News.