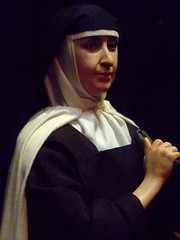 Saint Teresa of Avila, born in 1515 as Teresa de Cepeda y Ahumada in Gotarrendura, Spain, is a popular figure in modern examinations of Christian mysticism. She has become a kind of pop icon representing Christian funkiness from back in the day, you know, before Christianity got so “normal”. Joan Osborne, the woman who posed the intriguing question “What IF God was one of us?”, even wrote a song about Teresa and her craziness (back when people knew who Joan Osborne was). Yet, Teresa and her eccentric faith were not always embraced and celebrated. In fact, her faith was so wild and so challenging to the status quo of her time, that she faced persecution, accusations of mental illness and possession and, at one point, a demand to explain herself to the Spanish Inquisition.

Teresa was certainly funky. Hers was a wild, sometimes violent, all-consuming faith, ever a quest to know God and find God from within, even if the struggle caused her great physical and emotional pain.

Because she was extremely close to her friends and family, leaving them behind for a life devoted to Christ was both emotionally and physically draining for Teresa. For the first twenty years of her life as a nun, the inner battle she perceived between love of worldly-attachments, like family and self, and love of God undermined Teresa’s health. She tried using deep mental prayer to let go of her worldly-attachments and find a connection with God that would make her and the world disappear. When she couldn’t find such a connection, she became so distraught that she became physically ill. In fact, Teresa was paralytic for almost three years of this inner-struggle.

In her illness, Teresa began to experience what she described as “religious ecstasy”. She heard the voice of God and saw Christ in bodily form for nearly two years. Teresa wrote about these mystical experiences, their meaning and her struggle for union with God in her most famous books Life, The Way of Perfection and The Interior Castle.

In The Interior Castle, Teresa reflects on her search for union with God. Basically, the book reflects on three truths Teresa found in her spiritual life:
1) God as the Holy Trinity, is present in the soul supernaturally by Grace
2) Prayer is the great means to union with God
3) Solid virtue (in other words, Charity, Humility, Compassion) is necessary to seek God on Earth

Teresa understood the soul as a very clear crystal or diamond castle with many mansions, each mansion illuminated with the light of God. Within the innermost mansion God resides, calling us, steadfast like a lover calling their beloved. Therefore, God is not only present in the soul, but is also the fount of energy, life, and grace within us.

For Teresa, the realization that God is always within us and that we need only hear God’s calling, was a source of great peace for her and it eventually helped her come to terms with her own brokenness because God was still within her, wanting her with her brokenness. This was an important turnaround in her spiritual life from her previous struggles that had made her so ill. For Teresa, prayer essentially became time with a friend or lover.

Teresa also came to terms with her relationships on earth, envisioning them less as hindrances to communion with God and more as opportunities to embody Christ’s compassion and charity through what she called “solid virtue”. Her prayer below is good reflection of this idea:

Yours are the hands with which he is to bless men now.”

Teresa and St. John of the Cross form the Carmelite School of Spirituality, which has become regarded as one of the most influential and important movements in the Christian church, particularly regarding Christian mysticism and theological concepts of the relation between the Holy Trinity and the soul as well as the humanity of Christ.

Unlike St. John of the Cross, Teresa didn’t have any formal theological training. Yet, her writings are viewed as some of the most in depth reflections on seeking union with God, something I think can be attributed to the intensity that she sought God through prayer and meditation; she simply never stopped trying to understand God.

What is truly remarkable and perhaps revolutionary about Teresa’s spiritual life was that all one had to do was come humbly in prayer to spend time with God. Her spiritual formation is a reminder of the capacity that prayer has for each of us to approach God with all of our brokenness and hear God from within: It is free and available to us all.